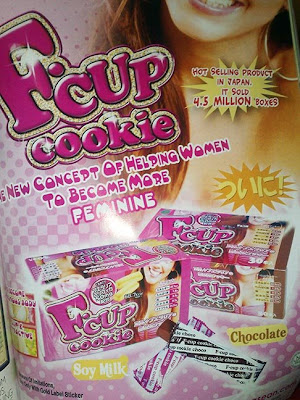 Anybody UP for the above? I’ve seen this product selling online in one of Malaysia’s popular forums. For this particular advert, it was advertised in a ladies magazine. Sasa retails this product for RM168 while online you can get it for about RM80 (which some say are fakes; hence the price difference).
Judith saw the advert as she was browsing with me through the mag and when she asked me what is it for, I was speechless. Haha. Couldn’t possibly say this cookie makes your boobies grow bigger. It would either ticked her off or make here even more interested in it.
INAPPROPRIATE and UNFITTING I’d think.
Has anyone tried it? Wonder does it really work. Not that I’m planning to try it but it looks…
IMPROBABLE, UNBELIEVABLE and UNLIKELY to work at least from my POV.
It says F-Cup Cookies promises to increase bust size in just 2 weeks of consumption… what if you only get F Cup on one side only.
VERY UNCOOL!
Whereas the outbox reads, ‘The New Concept of Helping Women To Become More Feminine‘. You’ll look more feminine on the outside but it wouldn’t make you feminine in the inside. You can’t change an apple from red to green. Plus, I don’t think anyone would want to be F-Cups.
Very UNDESIRABLE and INCONVENIENCE.
Besides, Japanese F-Cups are US DDs. So, in Malaysia, it would be…. urm no idea.
I guess you really have to eat a whole lot of F-Cup cookies to get the F-Cups. I mean having lots of non-F-Cup cookies does make your bum and tummy bigger. So far, there’s no one confirming that their boobs grew or enlarged after munching on the cookies.
I think I’ll rather stick to hot oils and massages. Just stick to your CUPS.. it’s safer and PROBABLY more feminine than F-Cups.
http://elena-bloggingtheblog.blogspot.com/feeds/posts/default