We were over at Great Eastern Mall over the weekend to stock up on dairy and protein food. After doing our grocery shopping, the kids went into Pets Wonderland as usual, to browse through the cages and acrylic boxes.

This time, it wasn’t hamsters or dogs. TERRAPINS… but in this case maybe ‘terrapinos’ and ‘terrapinas’. Lol!  They were awed by them. They said they were soooooo C-U-T-E. Then… the debate started with the chanting of “I want, I want!”. So, ME @ Mommy, said.. “GO ASK DADDY!”.

I’m sure Daddy loves terrapins too. He loves animals – all different species but to keep them as pets of course. I bet he wouldn’t mind snakes and creepy crawlies but not me. I don’t think I’m that adventurous.

So, as you know… stuff in pet shops inside shopping malls are a bit overpriced. We know we can get most of everything at almost half of the price outside. We went straight to an aquarium shop that we frequented before in the past to check out the price and perhaps do some purchasing?

Psst.. Hubby used to rear fishes in our tiny room. Discus and its plentiful of freshwater grassy species which I had a hard time tying them to rocks using little chicken-like nettings. You remember that, dear? Phew~

Ok back to terrapins… We arrived at the aquarium shop half and hour later with the kids bragging about the turtles all the way. I was kinda restless already. I wasn’t well and was quite blur in a way with the runny nose, bitter throat thingy and the terrible heat that’s trying to burst out of me. And.. we were right! The terrapins were way cheaper; each Taiwan Terrapins @ Long Tail are only at RM9 while it was RM18 at Pets Wonderland ; whereas the normal Terrapins @ Short Tail are only RM7 but were priced at RM12 at Pets Wonderland. So, we were glad that we saved quite a lot. Joe and Javier each chose a Taiwan Terrapin while Judith was fond of the Short Tail one. We got a glass aquarium along with a floating stone, mini filter pump plus Terrabites. Lol..

We got home, and put them into their new home. Hopefully a permanent home but they’re definitely not going down our throats. Here are a few pictures that I took. 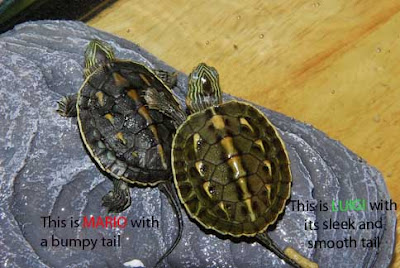 These 2 are way hyperactive.. always together as the saying goes, “He Aint’s Heavy, He’s My Brother”. 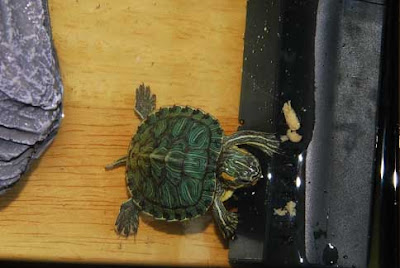 The shy one…. and a little grumpy too 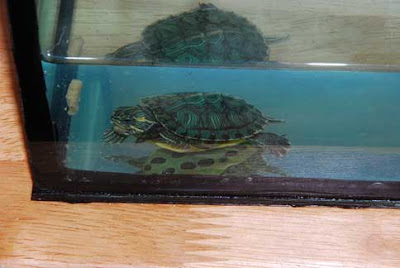 The kids dropped 3 pellets and it ate 2! 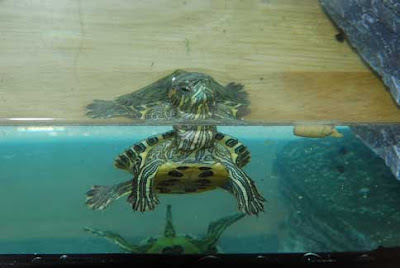 Octo-Babies from Oldest as in AGE

From HOME to OFFICE