If you don’t, let me magnify it for you…

This is what Joe brings home everyday after school. He brings home a pair of black knees with yellow turned black tie and sometimes artsy mural prints on his white crisp shirt plus his very own creation of grey-dyed white shoes.

I always wonder what he does to achieve such highly intense pitch black knees. So.. one day, I caught him giving the canteen floor some scrub treatment. Not really actually, he was playing catching-catching or whatever new games they have nowadays. Hmm I think it’s called, ‘Polis dan Penjahat’.

So, that’s where the black knees came from. Moving on to the tie.. why is it black too! Never found out why but most probably from polishing the tables while he was having his recess. Next.. to the shirt.

Crumpled stencilled shirt in the afternoon

What is the answer?

A. scratched his itchy back at the wall/door/pillar

B. hid behind doors while playing hide and seek

I don’t know what the answer is.. but it should be all of the above. For answer A; I thought it myself, B; he told me, and C; because I saw shoe prints on his shirt.

Finally on the shoes. I think that Pallas brand of shoes last longer than Bata brand shoes. I’m talking about the school shoes. Bata Comfit slippers were good and comfy when I was preggars. Bata school shoes only last for 2 months with weekly scrubs and washes but Pallas can last up to 4 months and still going on. I’ll be happy to update on Joe’s shoes later.

White shoes fading grey. Normal for anyone. Joe says he slides on the floor sometimes and then he kicks the wall, rocks, chair, etc and he and his friends play stepping on each others’ shoes. Why oh why. Thank goodness for ‘white powder shoe coating’.

But.. who could ever blame him? I did and still nag him and I know of course it’s Child’s Play. I just don’t want him to catch infection or splinters when he’s doing what he does every single day. So.. today he came into the car with clean knees. I thought that was awkward. I asked him what took him so long and he said,

Judith and Javier wanted to take pictures too.. so here they are: 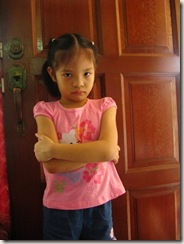 Judith wants to give her angry expression and I guess she succeed. However, Joe tried so hard but it was comical and I’m not releasing here due to his copyright.

Javier is showing his angry expression too.. FAILED! He’s cheery half the day and the other half consists of mood swings and cry therapy. He’s pouting now but not for very long. SUSU is his next expression.

Let The Women Be Women