The kids and I tagged my parents to Amcorp Mall yesterday. We went there to buy some books. Joe followed my Dad while the other 2 younger ones followed ME and my Mom. Javier eyed on Mc’Ds ice-cream so I got that for him then Judith spotted Roti Man. Joe; I heard later, that he cooed his way into asking my Dad for a quick bite of nuggets at Mc’Ds.

So, we went to the bookstore, I grabbed a few titles while the kids each got one. Javier got ROBOTS sticker book, Judith chose fables mini compilation while Joe made up his mind on an activity set of Spiderwicks Chronicles.

After everyone was happy with their purchase which left my purse lighter, I visited the loo. The kids didn’t need to release any liquid so, I asked them to wait outside my cubicle. There was a lady out there. While I was in my cubible, I heard her saying hie to them. As usual they replied hie. Then, she did this….

Upon hearing that, Judith muttered, “YUCK” so loudly. I was stealing laughs in my cubicle. That lady must have been so embarassed. She didn’t even say, ‘excuse me’. I waited until she left and I came out. The kids told me what happened earlier and I could only agree with them. Haha! 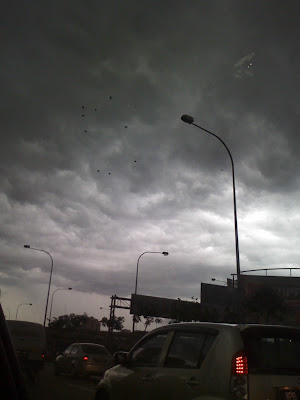 So, we came out of Amcorp parking and discovered the threatening sky. It was black and blue with hints of storms. Even the birds are going home for shelter. 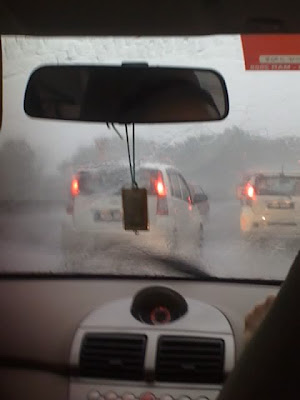 Not long after, it started to rain like cats and dogs. The heavy rain caused some congestion along the highway and waters were already rising in some places.

We reached home but thankfully it wasn’t raining as heavily as before. I gave the kids each a plastic bag to cover their heads while I umbrella-ed them semi-wetty to the porch.

Words From The Red Chair