My cousins came down for the holidays for 4 days and 3 nights stay. The first night, they stayed at the PNB Darby Park while the remaining nights they booked themselves into Dorsett Hotel along Jalan Imbi.

Yesterday, I brought them out shopping. After they checked into Dorsett, I checked out the weather and it was pretty safe to walk to Times Square. It was cloudy for sure, no blazing sun and no heavenly drops yet. So, we did a quick walk, crossed the busy roads and it was a scary experience. I think I haven’t been crossing main roads for quite some time now. It’s much more frightening than riding on a roller coaster. Gave me some heart pumping moments.

Berjaya Times Square… been so long since I did my shopping here. It’s more like a market area now. Most of the clothes here are below RM30. I could get an evening dress for as low as RM25. I can almost say that it’s cheaper than the night markets and the ‘pasar pagi’ I’ve been. The place was flooded with youngsters. There were one of a kind shops. Weird clothing’s and styles. One shop was selling different print of stockings. Net, mesh, denim, checkered, bows, etc. All you can think of. Some of them sold horribly eye soring outfits. I think I had cultural shock in Times Square. Maybe it’s the Harajuku Craze now. 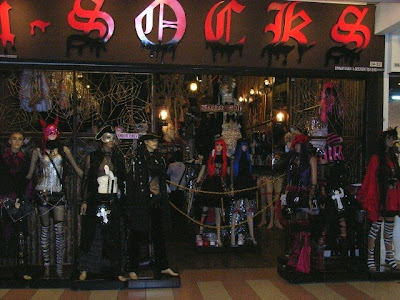 Oh and I heard from hubby, the Anime Festival is coming and it will be held at Times Square itself. So, I guess you gotta dress up for the occasion. Plenty of cos-play costumes to choose from. Hmm I might get this maiden costume that I saw to petridy my wardrobe. What do you think hubby? :p

We basically walked into each and every shop we saw. There were plenty of similar stuff too in some shops; so maybe, one opened a few branches scattering all over the multi floors.

After my cousins and aunt did their shopping, we wanted to walked back to the hotel but it was raining like cats and dogs. I decided not to go back. Why not hang around till we have our dinner then only we head back. Since it was pouring, we planned to take the monorail to Sungai Wang Plaza for a quick stop just to kill some time.

Sungai Wang… it was a lot less packed than Times Square. I didn’t believe my own eyes either. Where had all of the shoppers gone? BTS perhaps. They got some stuff, I got nothing haha! By the time we are done steadying the bags on our hands, we took the pedestrian bridge that linked Sungai Wang to Lot 10. From Lot 10, we walked pass Piccolo Hotel, KL Plaza then Star Hill. We took the other road back to Dorsett. The back way.

After 10 minutes of dreaded walking with our soles a little wet with water puddles, we arrived at the hotel. My aunt was telling me that maybe we could just sit at the lobby and rest first. Well, of course we didn’t. We took the lift right up into the room. My little cousin, heard me talking bout soaking tired feet in water, quickly went and fill the bathtub with warm water. He, of course did the soaking first. I could hear his ‘oohing’ and ‘aahing’. When he was done, he invited is into the soaking tub. Five of us, including himself, sat at the edges of the tub while dipping our tired looking feet into the water.

It was definitely an ‘oohing’ effect. My feet hurt like crap. It was a funny moment when all of us went quiet just enjoying the heat. Too bad I didn’t have my camera with me, if not it’s provable.

It was a great day in fact. Tiring also but not as tired as some that I experienced before which led me into suffering from migraines and gastric problems. I enjoyed a cup of Baskin Robbins too. Yay!