mom is back from the hospital. Dad and I went and discharge her this morning. Thank goodness checking out isn’t that slow. Money is gold to them that’s what I see. I had breakfast at the hospital cafeteria to save time but what I got was doctors *ithching about their colleagues over food. Something to amuse me while I eat alone – GREAT!
I went to mom‘s ward, grinned through the array of nurses perching over the counter. Went into the 4-bedded room, sat down and chat with mom about what, who, when, where and how on the updates of yesterday. Dad was still driving around looking for car park space and when he arrived, he said he had to go home to get the receipt to claim his deposit. LOL! We took like half an hour to the hospital because of the traffic congestion and now he had to go home and brave another one. That’s Dad! Always reminding us but forgets to remind himself.

Mom looks great as always. She doesn’t feel any pain and she told me she woke up right after the surgery, blurry but could hear the nurses chatting in the operation theater. She had her breakfast already which was supposed to be bread and jam but it was too sweet for her so she opt for plain oats instead.

When Dad got back from his treasure hunt, we met him at the lobby. Dad settled the bill while I went to the pharmacy to fetch mom‘s medication. Then, I had to hop back up to the first floor to return the nurser’s slip. Lifts were taking too long and there were tonnes of people waiting so I took the stairs. Believe me.. DO NOT ever take the stairs of a hospital, it’s freaking freaky. It’s cold, echoes and much worse you get goose bumps. I felt like being watched. Oooo… Always travel in pairs. HAHA!

Well, at the end of the day, mom got the parasite out and Dad got a basket of fruits (mom’s) for himself. 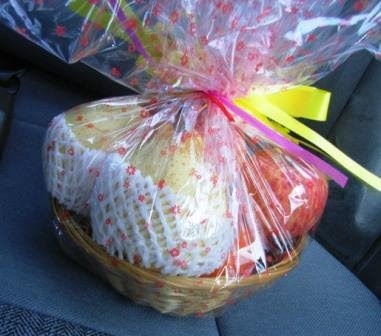 From HOME to OFFICE