Recently, my boys are falling head over heels over the DS game, Indiana Jones > LEGO.

Well they weren’t actually falling head over heels over the game.. it was more like falling head over each other, fighting to play the game. They’ve got to take turns as only one of the DSs’ are working now. One’s suffering from comatose, the other belongs to Judith which are filled with mostly girly games. Eventually, Jake got them the PS3 version instead which requires 1-2 players. 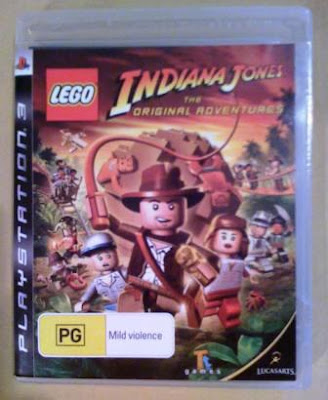 Get this, Indiana Jones; The Original Adventures is “PG@Mild Violence“.
Haha Jake and I don’t agree cuz’ after all the graphics are totally LEGO-brick style which is quite cute actually. When a character dies, there’s no blood nor organs tearing apart, just the occasional drop and break LEGO pieces laying around. Not even 3 seconds it auto-reconnects its body parts then TADA~ reborn!
The only violent thingy about it is that you can hit each other’s character over and over again. So it breaks and reconnect, breaks and reconnects, etc.
The game requires lots of teamwork, where one will be the monkey and the other will be the somewhat hero but then again it could be the other way round. Monkey/hero; it doesn’t matter as the fun is there and this game really tests the patience of my kids plus teaching them to rely on each other. It’s like if you don’t help… you, me, we won’t go anywhere. Most probably we’ll just stay there waiting for one to give in.
For example, there was one scenario where Javier’s character had to push the block from one end to the other.. then Joe’s character had to go through some obstacles and jump onto that block. His character failed to reach the block, failed the second and third time too. Javier was already stressing out, sighing away. So Jake decided he would aid the patience, therefore helped Joe but Jake only made it to the block after a third try. We were all laughing seeing the LEGO characters falling and breaking and the look of ‘geram-ness’ Jake had going through it.
See? Games are fun. Of course too much isn’t good and too little won’t bring out the ‘YOU‘ in you. Playing games alone are never fun. However playing with a friend, your family and a bunch of people is way more exciting than being a solo gamer. No wonder I don’t play games.. Guess BLOGGING is the new game for loners like me! Blek~
So overall, Jake and I rate Indiana Jones, the game “Game Friendly Kidiness 9/10 “
http://elena-bloggingtheblog.blogspot.com/feeds/posts/default

Judith’s Visit to the Salon, etc