This morning, I was busy getting Judith’s and Javier’s school bags when I heard Javier crying outside at the front door and first thing that came into my mind was that Judith must have irritated him or something. But to my shocking encounter, what happened was that one of Javier’s “CROCS” have been mutilated.
The murderer is my sister’s car tyre. You can obviously see the tyre marks on it. Look how ‘kemek’ it is. Beyond recognizable. The “CROC” itself couldn’t be save. It’s sad to say that it’s really really dead. Javier cried and sob upon the discovery of his “CROC’s” state. He was lost without words; just staring at it with tears dripping down his little chubby cheeks. Even my mom heard him crying from upstairs. She came down and had a look and she said,
“Aiyo, ‘kesian’, ‘chamlor’ can become until like that!”
Both me and my mom don’t know whether to find it amusing or upsetting cause’ the “CROC” did look kinda’ funny in a way. But I promised Javier we’ll get him a new pair. He can choose the color, the pattern, the type and the jibbitz himself. Something to clear his mind at least.
(Or maybe the so-called ‘murderer‘ can get Javier a new pair > ngek-ngek)
Then as usual Judith will chip-in, that she needs a new pair too!!!
So just now, he wore Joe’s old “CROCS” to school. Two sizes bigger for him I’d say. Managed it but still putting on his long and sad face.
Below are some newly-release pictures for your means of pondering.
BEWARE!!! They’re not recommended for the faint-hearted. 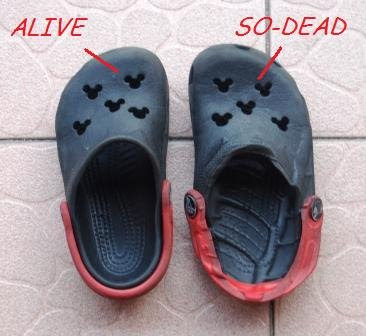 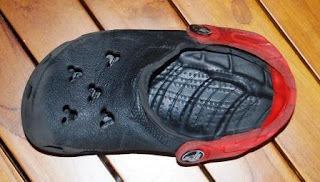 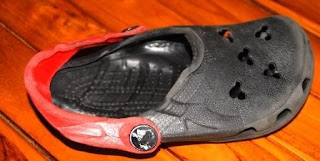 -so dead-
P/S: Please be informed that I’ll be going around; collecting donations to get Javier a new pair of “CROCS”… haha j/k only!
http://elena-bloggingtheblog.blogspot.com/feeds/posts/default

Birth of a New Pair of "CROCS"