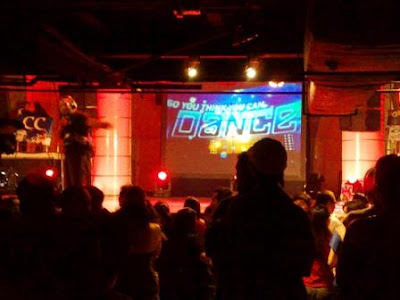 So You Think You Can Dance

Last night I went to Ruums..
So many people yet not enough room..
Flashing of colorful lights and camera zooms…
Blinded by spotlights making me VROOM~

The event started on time,
But the crowd went crazy by nine,
Just present the ticket no need a dime,
But had to queue up at the edgy line.

It was hard to get a view,
Cuz’ I wasn’t tall in height,
Mean and hopeless was the crew,
Didn’t give us a spot in sight.

Scream and shout that’s what I did
Cheering for CC like a little kid..
Tipping toes with heels aches my feet
Panting and sweaty that’s what I wanna get rid

Some Chinese guy stood right behind me
He came closer and closer as he can be
Soon, I felt a tap at my booty
Once then twice, I had enough already

Back to the stage where the competition was alive,
There weren’t Cha-Cha, Rumba nor Jive
CC and Hong’s performance was a great dive,
Stand back others, they’re dancing with knives.

Took big sips of beer and exchange some words
The atmosphere was loud and the air was dirt
Some was high, some flying like a bird
Dancing and getting ‘jiggy’ with it wouldn’t hurt.

We cheer for CC, we blend with the crowd..
Not like others they come; they cheer they leave; they must be in doubt..
So what if we’re doing well in other things..
Doesn’t mean silver spooners are born without dreams..
CC‘s here, she’s on stage to dance with her heart,
If you don’t like it then don’t even try to start.

With love and joy we come to support.
To bring family, friends, and fans together is worth a lot.
There might be comes and go’s in this line of life
But bees work as one in order to make a great hive. 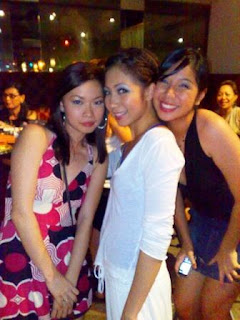 Me, CC and Nancy
http://elena-bloggingtheblog.blogspot.com/feeds/posts/default