Joe just had his mid-term. His Science and Maths paper questions were quite tough for a Year One..
I was scanning through the questions with my sister and we thought that the questions given were similar to the ones we had when we were in Year Four.

My sis’ was like..
“We learnt this in Year Four, how would little kids know about this kinda stuff?”
Have the standard really went up that high or it’s just cliche’? 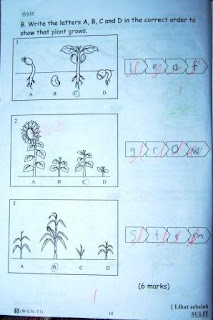 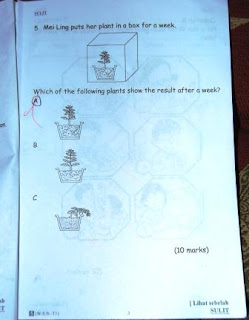 We were only introduced to the above at Year Four.. not Year One… Joe must have been so lost~ 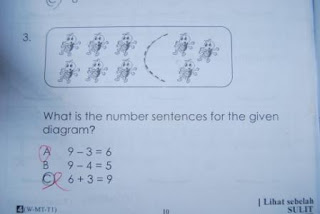 Well, after seeing those hardy questions, no wonder Joe didn’t handle the paper well..
He didn’t get an A and it wasn’t a C… it’s in between… can’t ask for more.. cause I know he has done his best.

He was disappointed in himself too.. I can tell

If they’re fast-forwarding the teachings of Science, then I wonder when the ministry of education will be introducing them ‘Sex Education’… in Year Six when they’re twelve?

Just got back Joe’s English Language paper.. and he scored an A for it… SALUTE~
But, check this out …

He got a ‘TICK’ for a mistake..
Now I’m waiting for his Bahasa Melayu paper… GOSH~ I know how much he avoid that subject…

Me on Mother’s Day