For the holidays, we brought our kids for a 3 days 2 nights’ stay in Malacca.
We had ourselves booked into Bayview Hotel on Friday… arrived at about 12 noon..
The hotel was nice but the service was horribly disappointing.. especially the arrival part.. there was no bellboy to take our luggages.. nor any valet services.. then the check-in service was very unpleasant… even a 3-star hotel can do better.. there were two receptionist.. a man and a lady.. both with sour faces.. not even a tiny spark of smile on their face.. they like ‘pakai hantam’ only which made me so ‘geram’.. even hubby was feeling irritated and annoying dy.. I can tell.. so we decided that we’ll switch to another hotel after a night’s stay.

We had the deluxe room which includes the jacuzzi in the bathroom.. I called the receptionist inquiring bout the broadband services; yeap it ain’t FOC (we need the internet to look for other hotels)… she asked me to go down to collect the cables and fill in the forms… oh my.. don’t they have the courtesy to send them up? I was already in the comfort of my room! So, I got down there.. but the elevator was super fast >thumbs up to the elevator.. just hit the button then ‘ding’.. dunno whether is it because there weren’t so many people using it or it’s the lift itself.. hmm..
Back to the broadband part… this is weird.. if we want to connect to the hotel’s wireless, we cannot plug in our laptop while we go online.. as in we do not charge and surf the net.. funny eh? But it does work.. If we plugged-in our laptop, the line disconnects swishly. So it isn’t limited connectivity, it’s limited power usage? Hmm….

After the kids had their swim at the freaking cold pool, we left to Umbai @ Seafood Haven @ Medan Ikan Bakar… not only ikan. got sotong, kerang, ketam… etc
We found our way eventually after some time.. we thought we were lost at first.. cuz’ got lots of misleading signs.. so many ‘ikan bakar’ signs put up.. btw take the Ujong Pasir road if you plan to go..There were so many different kind of stalls there.. we chose the one at the back… cuz’ got a lot of singapore cars.. hehe~
We ordered pais sambal, siakap kukus, lala tiga rasa, sotong goreng and kangkung… mind you.. Joe had 3 nasi lemaks’, Jake@Hubby had 4 nasi lemaks’… I ate most of the ‘lalas’.. they’re my favourite..
It was getting dark by the time we had finished eating… Guess the total amount we had to pay for dinner… Hehe.. we were surprised that it only costs us RM91.70… and got 70cents discount some more… must go back there again.. it’s a promised… btw, nasi lemak only cost 70cents per pack. So delicious some more.. not easy to find in KL.. 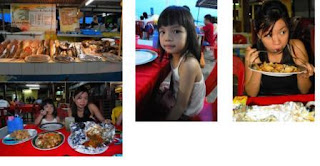 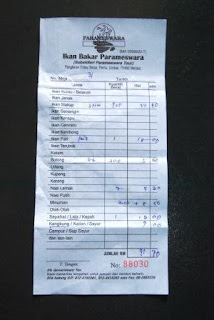 After dinner, we went back to the hotel.. there were electricity in the sky.. that’s how Javier puts it anyway.. After shower, Joe, Judith and Javier wanted to eat again… LOL~.
So they had maggi cuppa.. all 3 of them.. one cuppa per person… and they ate them through while watching the fireworks display from our hotel room.. there were activities going on at Padang Pahlawan. The Melaka River Festival was held at the same time too.. so we were glad to had spent the night at Bayview Hotel despite the bad service given.. thou the room service and housekeeping services was great.. another failure was Javier’s baby cot was broken.. so I called for an exchange.
The next day, we didn’t bother going for the FOC breakfast at the coffeehouse.. we checked out at 10am.. left to Equatorial Hotel. which was only minutes away from Bayview.. I know Malacca roads quite well cuz’ I’m a Malaccan… surprise eh?
So we checked in.. service was always good there.. so I don’t have to complain.. the bellboy was already at the door of our room even before we had arrived at our room.. Then we went down to the cafeteria and have our brunch.. was a bit pricey but it was worth it.. cuz’ the portion was big.
After visiting the loo, we headed straight to the Melaka Zoo at Ayer Keroh. There were so many people because of the school holidays.. parking was full too. As usual the kids enjoyed the visit to the zoo.. 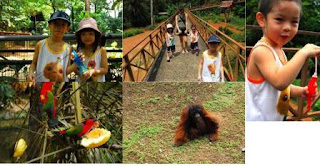 After the zoo visit, we went to McD’s drive-thru.. it’s only at the opposite of the zoo.. then at night, we were so tired that we doze off to sleep.. Joe and Judith shared a bed together.. and in the morning.. we saw something funny… 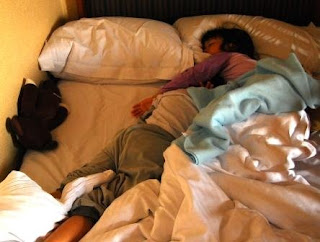 We had our breakfast in our room and the portions was big as usual. Even ‘ikan bilis’ and ‘kacang’ for the nasi lemak was a handful.. had the whole egg.. not cut into 6 slices.. even got kangkung..
Haha~
That was that.. our holiday in Malacca.. we left the hotel at 12.30pm.. stopped by at Tan Kim Hock to buy some souvenirs for both sides of our families.. Jake and I also had the famous Tan Kim Hock coconut cendol which was really refreshing… then Jake asked me to rest.. I was so tired that I slept through the journey home…

The Truth About MY Eyebrows

We won’t be going back there~