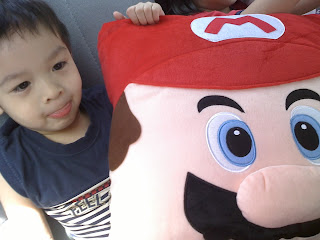 MARIO is more important than candy and snacks.. apparently to my kids anyway…
It’s the MARIO and Friends’ craze.. the latest craze of my kids so far..since the gaming session started one beautiful day…
There’s the MARIO Kart, MARIO Galaxy, Paper MARIO, MARIO & Luigi, MARIO… I also can’t name them all.. oh there’s the MARIO & Sonic; which I think how could they even collaborate.. Sonic is speedy whereas MARIO is sloppy…anyway, the only MARIO I know is MARIO Bros’. Goodness that was bout’ double decade ago…kinda feel old..
Even Luigi has his debut game!

My kids rocks at playing MARIO games.. sometimes when they handover the controller to me.. I get lost..and start hitting the buttons.. worse thing is that my 3 year old plays better than me.. he even taught me some moves..what to do?
Back then MARIO was 2D.. now is like up, down, left, right.. I can’t even concentrate where to go.. they make it so interesting that it’s too complicated for me to play…but MARIO Kart is okay for me.. only driving mer..hehe ‘sap sap sui’~

Now MARIO is in the arcade too.. we purposely brought the kids to the arcade at Sunway Pyramid to play MARIO Kart..
Very exciting for them.. don’t wanna stop playing.. pity Judith and Javier were too short to reach the pedals.. so hubby have to be the highchair… Joe was very ‘geng’.. he played with other 3 players which are older than him; and he thrashed them..Woo-hoo~..
Hubby only got second thou’.. LOL~

The Craze moves on.. so far we have MARIO keychains, MARIO posters, MARIO pillows, MARIO bolsters, MARIO bags, MARIO and Friends cuddly soft toys, MARIO decoratives.. my little boy even asked me to buy MARIO-like clothings..which I eventually did.. I got him a blue Dungaree, red shirt for innerwear and also a red cap… so cute~
I have to join in the craze too.. you know? To fit in… I’ve got MARIO hand phone danglers..

Well the craze had been started by hubby, this is because, hubby is also a MARIO fanatic.. wahaha.. well who isn’t right? I used to be a fan too.. well MARIO Bros’, anyway… only need to
move forward and jump.. easy peasy~

Even though some parents think that video games aren’t healthy among kids; but I don’t agree on that.. well it depends on the genre of games they play. As long you make sure they don’t spend half of their day glued to the controller.. my kids actually learnt a lot of stuff.. besides the aftermath of the gaming sessions…

They turn into the characters and start jumping around in the living room.. hopping from one sofa to another.. throwing the square pillows everywhere..my mom hates it.. cuz she has to clean up after that..

ME? I close one eye!
I don’t really stop them from doing that.. they’re happy.. and you can see that this littlest things they do somehow creates a smile on my face.. they can be very loud and cute at the same time… but who cares.. I don’t want my kids to be the kind that sits on the chair the whole day staring at the box set.. or the kind that are too disciplined to be called kids.

Adults have pillow fights.. so do children!!!
YAY~